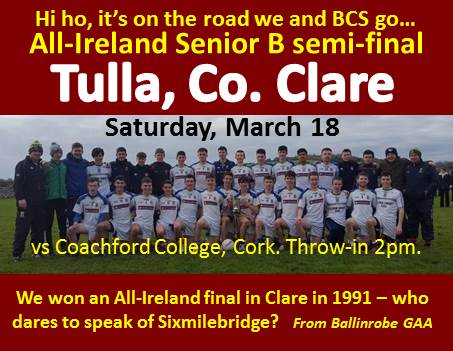 UPDATE, St Patrick’s morning: Padraic Costello Snr confirmed as member of commentary team. ‘Will tog for Tulla’ was his exact response on What’s App. It wouldn’t be a commentary without him anyway. Usual security arrangements will be put in place to give him safe passage to and fro. We would ask fans to refrain etc. Coverage starts shortly before 2pm tomorrow. Let us know where you’ll be be tuned. By the way, we will give updates on how our neighbours St Colman’s College, Claremorris, are getting on versus St Brendan’s College, Killarney, in the Senior A semi-final at the same time.

And we aim to have a full commentary of the game here on Club Radio.

Tune in here shortly before 2pm Saturday for coverage. Commentator Liam Horan – hope to have Padraig Costello Snr along too as match analyst, and the SOS has gone out to Coachford College for a representative to fly their flag.

The game will be live on this link HERE – and will be archived there afterwards too.

Please RT, share, email, SMS etc this page – lots of people who will want to follow the game but won’t be able to get there.

We’re not sure what the 3G coverage is like in Tulla but will hopefully be okay.