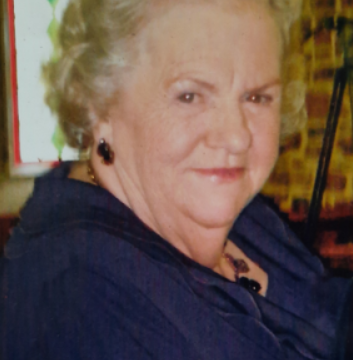 Ina, originally from Claremorris, had a long and enjoyable career as a nurse up to her retirement in Castlebar. Ina was a founding Officer of the Ballinrobe Active Retirement organisation as its Secretary and was most recently its Treasurer.
A celebrated baker and cook, she regularly took home prizes from the annual Ballinrobe Agricultural Show, achieving National fame as the 1964 National Bread baking Champion from 6000 applicants. Ina’s prize was presented by the then Minister for Agriculture, Charles Haughey. An avid card player, Ina enjoyed playing bridge with her friends at the 84 Bridge Club, Ballinrobe.

The Horan family are synonymous with Ballinrobe GAA Club, Ina’s daughters Elizabeth and Sara wore the familiar Maroon and Yellow, her sons Michael and Liam represented the Club with distinction at hurling and football, with Maurice going on to represent Mayo at senior level, as well as contributing to the Club administratively. The Noone family are well known in GAA circles as they lined out with the Claremorris GAA Club, however her brother John also played for Ballinrobe whilst working as a vet in the town.

Sympathy is extended to Billy; daughters Elizabeth and Sara; sons Michael, Liam and Maurice; Sister Mary Fahy (Galway) and John Noone (Claremorris) son in law Paul Bree and daughters in law Teresa, Noreen and Brid; brother in law, Con Horan, sisters in law, Patricia Noone, Maura Roche and Carmel Biggins; nephews, nieces and adored grandchildren and a further wide circle of family and friends, predeceased by her much loved twin sister Betty Killeen and brother Michael Noone.