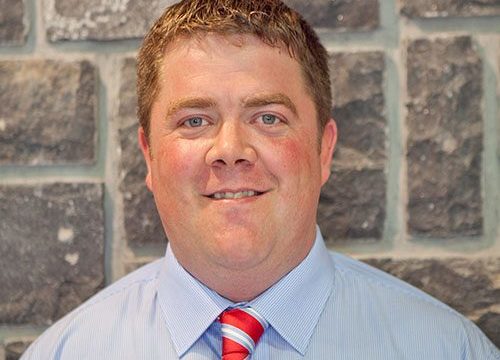 Update – Wednesday, February 20: Aidan’s funeral details are available HERE. At the bottom of this page, you will also see newly added pictures of Aidan in the Ballinrobe colours. Friday night’s 50:50 draw and Saturday morning’s Robe Rockets are both postponed this weekend as a mark of respect. Club members will not be selling 50:50 tickets in the local pubs on Saturday night either.

Ballinrobe GAA Club is saddened to announce the sudden death of Aidan Golden (40), a distinguished wearer of the club’s maroon and yellow jersey.

He played with Ballinrobe at all levels, including as a member of our first 15 in the 2000 Mayo Intermediate Football and U21 Championship final wins over Ballaghaderreen and Kilmaine respectively, and the 2004 Mayo Senior League Final victory over Knockmore.

Aidan, Lakelawns, Ballinrobe, who celebrated his 40th birthday just a few weeks ago, died suddenly after taking ill on Sunday, February 17, during a family holiday in Portugal.

His death has cast a pall of gloom over Ballinrobe and the entire south Mayo region where Aidan was an intensely popular figure.

Aidan was a regular fixture on Ballinrobe teams from U10 level upwards as he grew up on Ballinrobe’s Clonbur Road, and apart from the 2000 county title wins, he also won a South Mayo Minor Football Championship and was a sub. on the team that defeated Shrule-Glencorrib in the 2002 Mayo Intermediate final.

Supporters of the club recall with great fondness Aidan’s rendition of ‘We Are The Champions’ from a balcony in Cornmarket when the U21 team returned home to Ballinrobe with the county cup.

Members of his family have had a long association with the club, including his brother, Brian, who played for the club for many years and also served as the club’s treasurer.

He also played for Ballinrobe RFC at all levels and enjoyed his regular games of golf at Ballinrobe Golf Club. Aidan was employed by McGrath’s Limestone, Cong, a local business which has always been extremely supportive of Ballinrobe GAA and various other sporting organisations in this region.

Mayo SFL champions, 2004. Aidan is eighth from left in the back row.

Sympathy is extended to his wife, Aedemar; parents James and Marguerite; brothers Brian and Noel; and sister Mary; nephews; nieces; and a wide circle of family and friends.

The club will form a guard of honour at his funeral ceremony, details of which have not yet been announced. Our club Registration Night, scheduled for tomorrow night (Tuesday) , has been postponed as a mark of respect. Ballinrobe, U21 county champions 2000. W beat Kilmaine in the final at Hollymount. Ballinrobe, South Mayo U21 champions, 2000. Kilmaine were our opponents in the final at Flanagan Park, Ballinrobe.