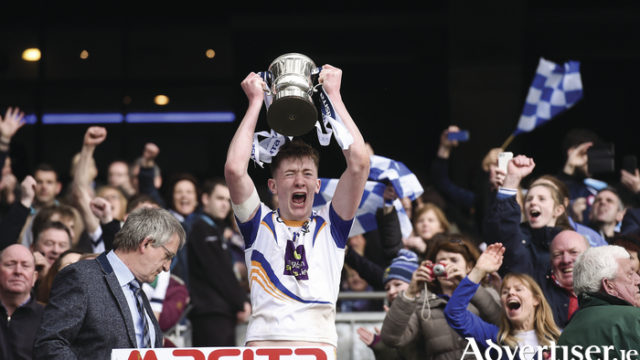 April 2, 2017
Home » News » Our boys will be introduced at MacHale Park today + tour of all clubs this evening

In the spirit of striking while the iron is hot, it will be a busy day for Ballinrobe Community School.

After their thrilling win over St Ciaran’s, Ballygawley, Co. Tyrone, in yesterday’s All-Ireland Senior B football final at Croke Park, they will take to the field once again today.

This time, they won’t have to break a sweat though – they will be introduced to the crowd at half-time in the crucial Allianz NFL Division 1A clash between Mayo and Donegal at Elverys MacHale Park. If you’re there, do show your appreciation.

Afterwards, it’s back on the bus again as they go on tour. Eight clubs are represented on the squad.

The homecoming last night was centred on Ballinrobe, where a huge crowd turned out, and today the team and management will bring the Paddy Drummond Cup to the other seven clubs – Hollymount-Carramore (home of captain Nathan Moran), Mayo Gaels, Garrymore, Kilmaine, The Neale, Ballintubber and over the border and into Clonbur.

Michael King, from the South Mayo GAA board, has had the route planner out all morning. Paris-Dakkar has nothing on this manouevre. Here’s what he has come up with – in all cases, the team will visit the local GAA grounds, back to where it all began:

…and they will then make their way back to Ballinrobe.

The players are genuinely appreciative of all the support they have received on this march to glory, most notably yesterday in Croke Park and last night in a thronged Ballinrobe.

A few other pointers if you want to relive the day and night: