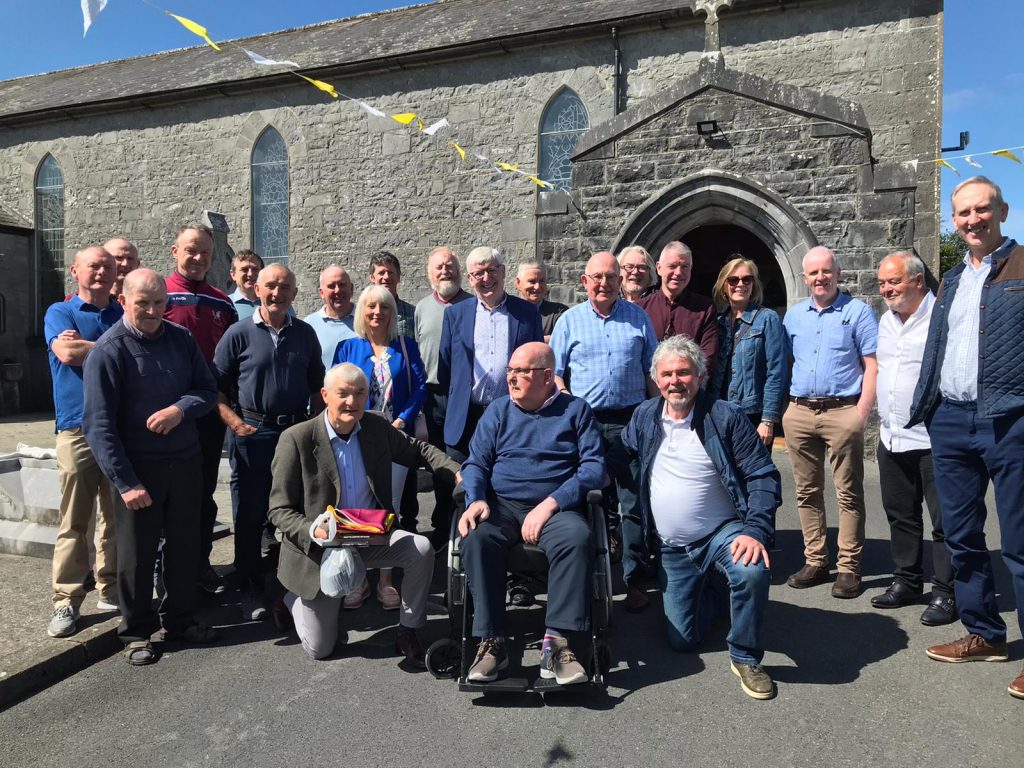 Friends and family members pictured outside Partry Church after the memorial Mass for the late Kieran Cawley.

The Mass coincided with the second anniversary of Kieran’s death and was followed by interment of his remains in Ballyovey Graveyard.

Kieran died in Philadelphia during Covid-19, and it was only now that his family and friends in Ireland could come together for a fitting send-off.

Members of Ballinrobe GAA and Basketball Clubs, led by Kieran’s former playing colleagues from the 1970s and ‘802, formed a guard of honour at the removal of the remains. Tommie O’Malley, a close friend of Kieran’s and a central figure in both clubs for many years, delivered a well-observed eulogy (see below).

Kieran’s daughter Alison travelled from Philadelphia and regaled the large attendance with fond memories of her father. She was formally presented with a Ballinrobe GAA flag and jersey and a Ballinrobe basketball singlet.

Kieran’s brother Gerry also recalled Kieran’s life and thanked those who had made the memorial Mass possible.

Here is the eulogy delivered by Tommie O’Malley:

It is a great privilege and honour to say a few words about the late Kieran Cawley on behalf of the Ballinrobe Football Club.  For a family with such deep roots in this particular area, it is most appropriate that Kieran’s ashes are being laid to rest in the breathtaking setting of Ballyovey overlooking beautiful Lough Carra.

Kieran was a noted Football and Basketball player in his youth, and played an integral role in Ballinrobe’s senior football campaigns from 1979 to 1984.   One abiding memory I have of Kieran on the football pitch, was at McHale Park in a match we lost in the County Semi-Final against Knockmore in 1980.  Kieran was exceptional that day as full-forward and at mid-field.

I was player-manager the same day, and Kieran often jested with me afterwards that he was one of the few players to ever play in two positions at the same time.

Other than Kieran, there is only one other member of that team gone to his eternal reward, and that is the late Billy Diskin.  Both Kieran and Billy were the backbone of that team.

That team won every competition we entered with the exception of the senior county championship; a tournament we were most unlucky not to win particularly the day Kieran played his heart out at full forward and midfield.  That panel trained hard and played hard; and each made a massive commitment to the Cause of bringing honour and glory to Ballinrobe.  We socialised together and became a remarkably tight unit of comrades.  Kieran never forgot the spirit of that team and could often later recall Pádraic Costello singing the ‘Half Crown’; Michael Flannery singing ‘Joe Dolan’ and Luke O’Malley’s rendition of ‘The Wedding Song’ backed up by the rousing chorus of the Ballinrobe Football panel –one voice sweeter and more fervent than the next.

I was a decade older than Kieran. I had only known him as ‘The Bullet’ until he came to stay at my flat in Castlebar for one night.  He stayed for a full year.

In that year, we became great friends, and found out that we had one thing in common, a great love for all things Ballinrobe, especially everything to do with Ballinrobe Football and Basketball.

During that year I also came to learn of Kieran’s honesty, integrity and cheerful disposition; aspects of Kieran’s character I’m sure his wife Gabby and daughter Alison, and the extended Cawley family are very familiar with.

By 1984, Kieran had immigrated to the States and his absence was sorely felt in Ballinrobe.  In 2019 after decades’ away from the area, it was Ballinrobe’s privilege to recognise Kieran’s contribution to the town by awarding him the Hall of Fame Award.  All of his team mates were present that night to celebrate the occasion with Kieran and the Cawley family.  When Kieran got that award it was like old times again.  Bonds forged in the late 1970s amongst that panel remained as tight that night as they remain to this day, the day we celebrate Kieran’s life.

The last conversation I had with Kieran was at Enniscrone looking out at the Atlantic shortly after he received his Hall of Fame award.  The gist of our conversation that night was about the tough times that lay ahead for Kieran.  Even though he was ill, Kieran swore he’d make it back home again within the year.   Covid 19 put paid to that plan.  That evening, Kieran told me of how he had truly landed on his feet when he met the love of his life, Gabby; and how proud he was of his daughter, Alison.

On behalf of myself and the Ballinrobe Football Club, I would like to extend my deepest sympathies to Gabby, Alison and the all of the extended Cawley family.  Kieran’s remains will shortly be laid to rest with his beloved parents at Ballyovey. 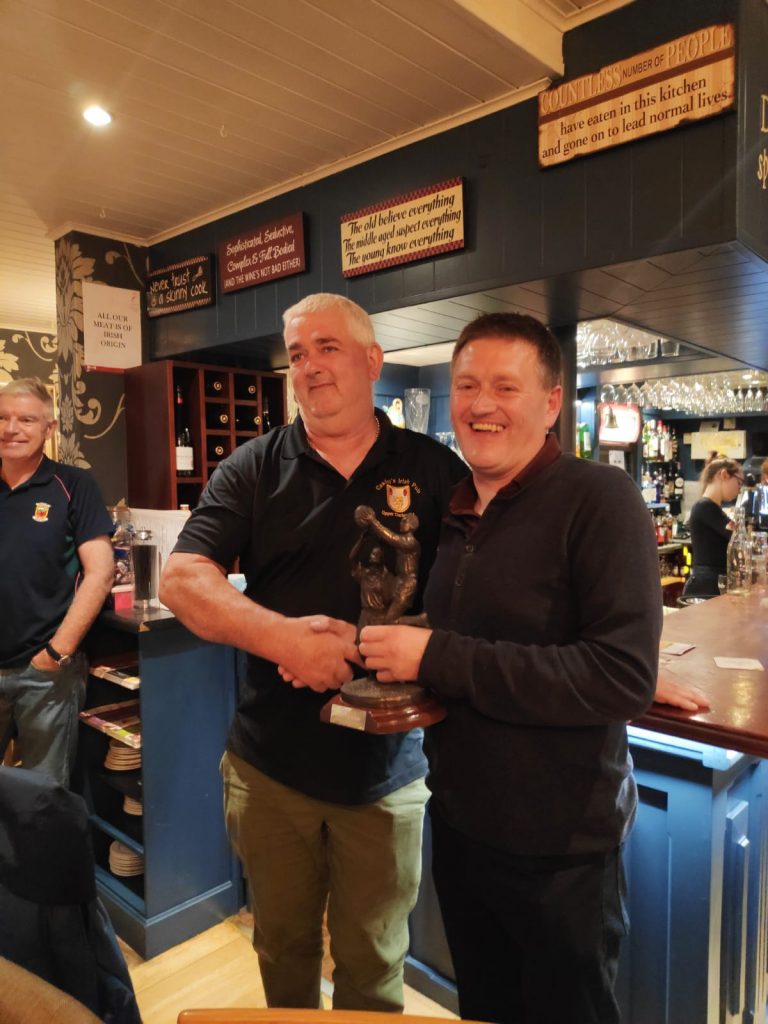