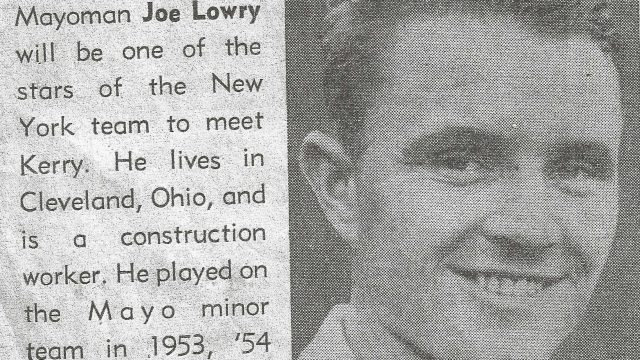 Ballinrobe GAA Club has paid tribute to Joe Lowry, who passed away in Cleveland, USA, on Thursday June 30. Aged 85, Joe was a native of The Farm, Ballinrobe, and a distinguished footballer with Ballinrobe and Mayo before he emigrated to the USA in 1956. A substitute on the Mayo team which won the All-Ireland Minor Championship in 1953, he played for the county minors in 1954 and 1955.
He was also selected on the Connacht Colleges combined team which won the All-Ireland Interprovincial Series. Joe’s final game for Ballinrobe came in the O’Mara Cup final of 1955, which was actually played in 1956. He emigrated to Cleveland just a few days later, and worked in construction in his adopted city.
He continued to play Gaelic football in Cleveland and returned to play with New York in a National League final in Croke Park. His brother Tommy, who passed away in recent years, also played for Ballinrobe for many years. Joe’s health had deteriorated in recent years.
“Joe was an excellent footballer and a huge loss to Ballinrobe when he left to work and settle in Cleveland. He never lost interest in the fortunes of our club, however, and made regular contact to keep himself up to date,” said club historian Michael Coyne.
“We extend our sympathy to the Lowry family on their sad loss. Growing up, I often heard stories of Joe’s exploits for Ballinrobe and Mayo. The death of one our stars from yesteryear is always a sad occasion for the club,” said club chairman John Flannelly.

Photos show Joe (centre of three men) on a St Patrick’s GAA Club, Cleveland, team in 1962; Joe and his wife with Sean Mayo players Sean Kilbride (left, Ballaghaderreen) and Tommie O’Malley (right, Ballinrobe) when the Mayo team visited Cleveland in 1970; a newspaper article from Cleveland featuring Joe; a Ballinrobe team of the mid 1950s, Joe is fourth from the right on the front row. 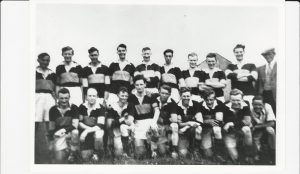 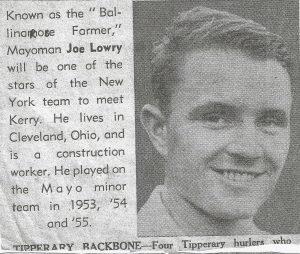 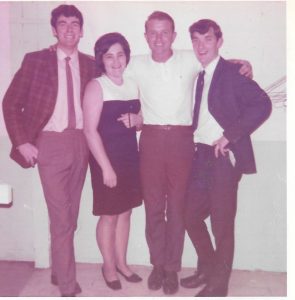