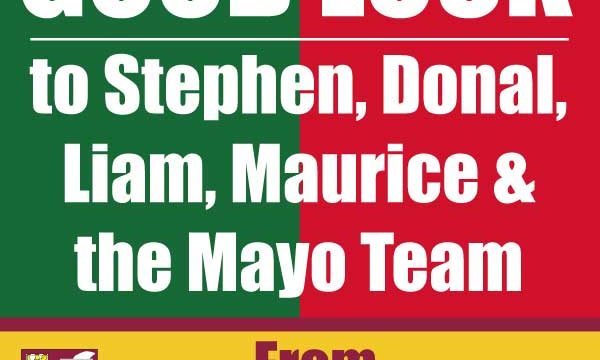 Ballinrobe is strongly represented in the Mayo set-up that will go toe-to-toe with Dublin in the All-Ireland senior football final on Sunday week – we have four club members involved.

Donal Vaughan is, once again, a member of the Mayo team, just as he has been consistently for the past number of years. Donal plays his club football with Ballinrobe, and is a successful local businessperson – Vaughan Shoes are also long-time supporters and sponsors of Ballinrobe GAA club.

Stephen Rochford, the manager, is a native of Crossmolina, but he is living and married in Ballinrobe. Stephen first came to Ballinrobe to work in the local AIB Bank branch, and met and married local woman Laura Gill – she of singing and acting renown with Ballinrobe Musical Society and Ballinrobe Folk Choir. They have two children – Dara and the recent arrival Rory. Stephen was previously joint manager of the club team that won a Mayo U21 B title – as far as I can recall, Donal Vaughan was on that team too, n’est pas?

Liam Horan, a former club secretary and our current vice-chairperson, is the media co-ordinator for the Mayo team. His brother Maurice, who starred with Ballinrobe for many years, and managed Limerick footballers for three years, is head of the video analysis & stats team. Maurice lives in Tralee, Co. Kerry. Their father Billy is our veteran club PRO, of course.

We wish all four – and the entire Mayo operation – every success on September 18.