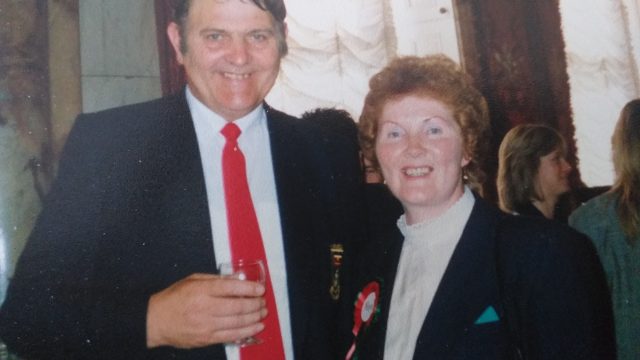 He was synonymous with the GAA in Ballinrobe and Mayo throughout his life. The O’Haire Memorial Cup for Mayo secondary colleges ensures his memory remains alive for all those who knew and loved him.

A native of Cregduff, Ballinrobe, he played colleges football in the 1950s with Ballinrobe CBS. He also played underage, junior and senior football with Ballinrobe from the 1950s through to the 1970s. He won O’Mara Cup medals in 1956, 1958, 1962 and ’967, and a cherished Mayo Junior Football Championship in 1958.

In 1959, he played for Mayo at junior level. At club level, he also served as club secretary and was chairman at the time of his untimely death in Flanagan Park on September 5th, 1996. Within the club, he was an ever-present presence who cared only for the advancement of the club and its players – at time of crisis, he was a shrewd and calming figure. He coached teams at all levels to divisional and county success.

Outside of Ballinrobe, Christy became a prominent referee. He was chairman of the South Mayo Board for eleven years till 1990. He was also involved with the Mayo Under 21 board when they won the All Ireland in 1974 and chairman when they claimed the title again in 1983.

In September 1996, when Christy died, Mayo were hot on the trail of All-Ireland glory, just as they are now. There was a real poignancy about the sight of so many green and red flags hanging from local buildings as Christy’s remains moved through the town.

May this great servant of Ballinrobe and Mayo rest in peace. His contribution will never be forgotten.