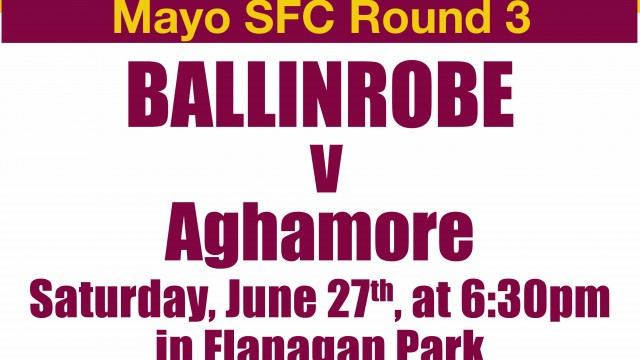 The Man on the Video: Micheal Keane. Shoots as fast as he played. The brains behind this operation.

Commentator: Liam Horan. Talks better than he played. Even better.

Ballinrobe Analyst: Padraic Costello Snr. Needs no introduction. But will get one all the same. The veterans’ veteran, the straight talkers’ straight talker. Never needed an iPad to make his point, doesn’t now. Played in every position for Ballinrobe. Intermediate championship winner in 1979, junior winner in 1990, wore the green and red (and we don’t mean Ballina or Kilmaine) too.

Aghamore Analyst: Adrian Hession, a man with strong local connections, indeed; might even be half a Ballinrobe man really. Best known as Mr Hurling Promotion in Mayo, plays in goal for Tooreen, and has donned the red and white of Aghamore too. We hope he won’t be over-awed by P Cos.

News from earlier in the week:

Our intrepid former player Micheál Keane (recently retired from playing duties after a stellar career, and now serving as PRO of our Bord na nOg section) has been experimenting of late with his video camera – and we can now confirm that Saturday’s Mayo SFC round three clash with Aghamore will be streamed live on the net.
Thanks to the county board for giving us permission to stream the game live, and we are also encouraging our friends in Aghamore to spread the word among their supporters as well.
More anon.
Full commentary will also be provided by Liam Horan. (First sub, a young lad called Mike Finnerty hoping to get a bit of experience). Match analyst Padraic Costello Snr (there was never a sub. who could fill his boots).