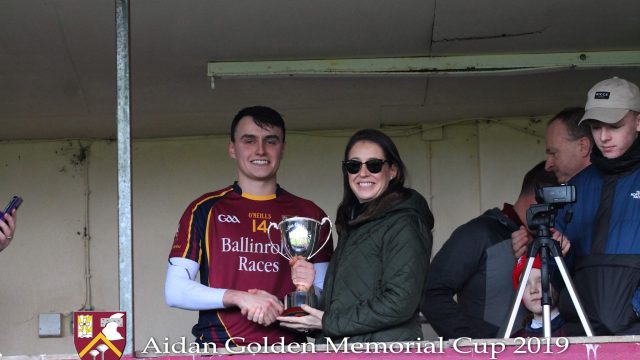 St Stephen’s Day 2019 saw the hosting of the inaugural Aidan Golden Memorial Cup match in memory of Aidan Golden, a member of the 2000 and 2002 Mayo Intermediate Championship winning sides.  Aidan sadly passed away earlier this year.

The game was between the members of those great teams and the current crop of Intermediate players.

Billed as the must-see Ballinrobe GAA event of the year, there was an attendance of approximately 300 spectators to see this sporting spectacle and observe has time been good to the members of that history-making team. There were three former inter-county managers on the side-lines and playing on the pitch along with inter-county players of all levels past and present playing.

The game in itself was hugely entertaining, and, with the match commentary of Liam Horan over the public address system, it was a thoroughly enjoyable afternoon.  The game was also broadcast live on Club Radio.

It took a while for the veterans’ footballing muscle memory to kick back in with some of them falling to the ground with no opposition anywhere them.  There were also many shouts of the veterans picking the ball off the ground, until the youngsters were reminded that when most of the county championship winning side played football, players were permitted to pick a rolling ball off the ground.

The youngsters got off to a rip-roaring start and notched up a lead of 1-3 to no score before the youngsters started to have pity on the veterans. Keith McTigue got the old-timers off the mark with two fantastic long-range points.  By half time the score was 1-6 to 2-3 and the game appeared to be in the melting pot – although, at times, the veterans did have up to 20 players on the pitch.

As the second half progressed, time started to catch up with the veterans. However due to superior numbers on the field – a testament to the tactical genius of joint managers Tommy O’Malley and Peter Ford – and some mid-season transfers from the current intermediate team, they managed to keep the game competitive to the end.

On the final whistle, and with the youngsters the victors, everyone was in great form after a fun day.

The Cup was presented by Aidan’s wife, Aedemar, to Kevin Quinn, the captain of the current Intermediate team.  Aedemar spoke of Aidan’s love of the GAA Club and the friends he made playing football with the club since childhood, and how if he was there he would have loved the day.

Aidan’s brother Brian, spoke on behalf of the Golden family, expressing their gratitude to the club, the organisers and to everybody who contributed to the day.

After the presentation, members of the Golden family handed out medals to everybody who played the game, about 45 in total (all at the same time, at one point).

Afterwards, old friends and teammates got to catch up and relive old times.  Then everybody retired to the Valkenburg for refreshments and to watch the game all over again followed by a video of the 2002 Mayo Intermediate Championship final.

While the occasion was a sad one, in that we were all there to remember a deceased friend and teammate, an enjoyable day was had by all.